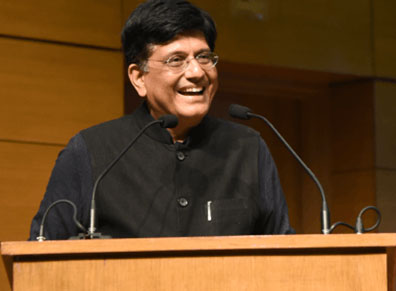 "Good economics makes for good politics. We are today at the cusp of a development explosion."

In his tenure as Minister of Commerce & Industry, India achieved its highest ever exports of about $675 billion in 2021-22. He led the signing of a Free Trade Agreement (FTA) with UAE, the fastest ever negotiated FTA globally and the India-Australia Economic Cooperation and Trade Agreement (ECTA), India’s 1st agreement with a developed country after a decade. He oversaw the launch of Production Linked Incentive (PLI) Schemes to bring manufacturing at the center stage and emphasize its significance in driving growth and creating jobs.

As Minister of Consumer Affairs, Food & Public distribution, he led the implementation of the world’s largest food security programme, Pradhan Mantri Garib Kalyan Anna Yojana (PMGKAY) by distribution of free foodgrains to nearly 80 crore people over 2 years, providing support to the poor, vulnerable, weaker sections of society, who were affected the most during the COVID-19 pandemic. As Minister of Railways, India achieved the best ever safety record of zero passenger deaths in rail accidents. The Power, Coal and New & Renewable Energy ministries led transformational changes in India’s power sector and successfully implemented the world’s largest LED bulb distribution programme (UJALA) for energy efficiency. He also received the 4th Annual Carnot Prize in 2018 recognising the pathbreaking transformations in India’s energy sector.

During his 35 year long political career, Mr Goyal has held several important positions at different levels in the world’s largest political party, the Bharatiya Janata Party (BJP) and is in its National Executive. He has been the National Treasurer of the Party. In the 2019 Indian General Elections, he was a member of the Manifesto and Publicity Committees. He also headed the BJP’s Information Communication Campaign Committee for the Indian General Elections 2014.

Mr Goyal has had a brilliant academic record – all India second rank holder Chartered Accountant and second rank holder in Law in Mumbai University. He was a well-known investment banker and has advised top corporations on management strategy and growth. He also served on the Board of India’s largest commercial bank, the State Bank of India and Bank of Baroda. He was also nominated by the Government of India to the Task Force for Interlinking of Rivers in 2002. His father, Late Vedprakash Goyal was Union Minister of Shipping, and the National Treasurer of the BJP for over two decades. His mother Chandrakanta Goyal was elected thrice to the Maharashtra Legislative Assembly from Mumbai. He is married to Seema, an active social worker, and has two children – Dhruv and Radhika, who have both graduated from Harvard University, USA.