After the new 12-km long stretch connecting Navi Mumbai with Kharkopar, there is more good news for Mumbai’s local commuters. ₹65,000 Cr has been approved for Rail infrastructure projects to facilitate the metamorphosis of Navi Mumbai 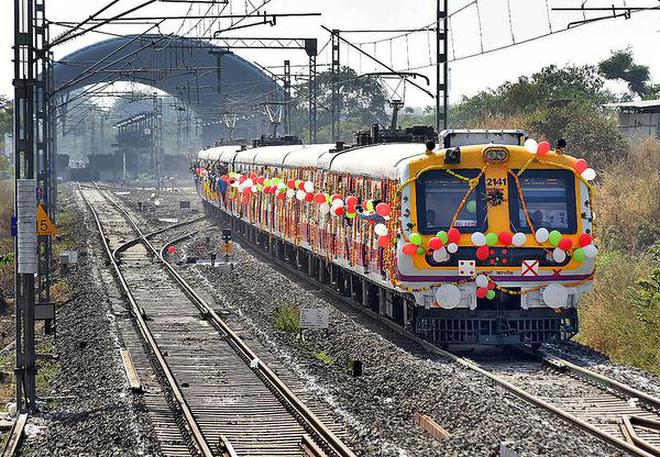 Chief Minister Devendra Fadnavis on Sunday said not only the suburban region but the Mumbai Metropolitan Region also needs to be considered before making urban plans in future.

“Mobility and connectivity is quintessential for human existence,” the Chief Minister said at Kharkopar railway station after commissioning the new Nerul-Seawoods Darave-Belapur-Kharkopar suburban rail corridor and Panvel-Pen electrification work. The new line is the first phase of the 27-km Nerul-Belapur-Uran corridor on the Harbour Line. Mr. Fadnavis said, “Everything will get connected one day from bus to Metro to water transport to Monorail. One will be able to travel with a single ticket. Panvel will become the next important terminus like Dadar or CSMT.”

Upgrading services
Railway Minister Piyush Goyal said up to ₹65,000 crore has been approved for a host of rail infrastructure projects on the suburban network in the city. Mr. Goyal said, “The decision of having an investment of a whopping ₹60,000 crore to ₹65,000 crore in the last proposed Budget has been approved. This will ensure the upgrading of the suburban railway system of Mumbai and its adjacent areas.”

Mr. Goyal appreciated the State government for completing the project nine months ahead of schedule. He said, “We have successfully launched AC trains in Mumbai and have ordered for 40 more. I believe in the next four to four-and-a-half years, the suburban rail network of Mumbai, Navi Mumbai or Maha Mumbai will see a complete metamorphosis.” Mr. Goyal said Mr. Fadnavis has set a target of making Maharashtra a trillion-dollar economy by 2025.

Heavy Industries Minister Anant Geete backed the further expansion of the network to Pen, Diva and Roha. He said, “Mumbai is known for its connectivity and strong transport network. By expanding the facilities to other places, creation of Maha Mumbai is in progress.” Lokesh Chandra, managing director of CIDCO, termed the new line a Diwali gift for the people. He said, “We plan to connect it to JNPT and Navi Mumbai airport.”

Casualties and injuries from Rail accidents have fallen by a phenomenal 84% in the last one year, thanks to Railways' concerted and committed efforts to improve infrastructure and increase passenger safety